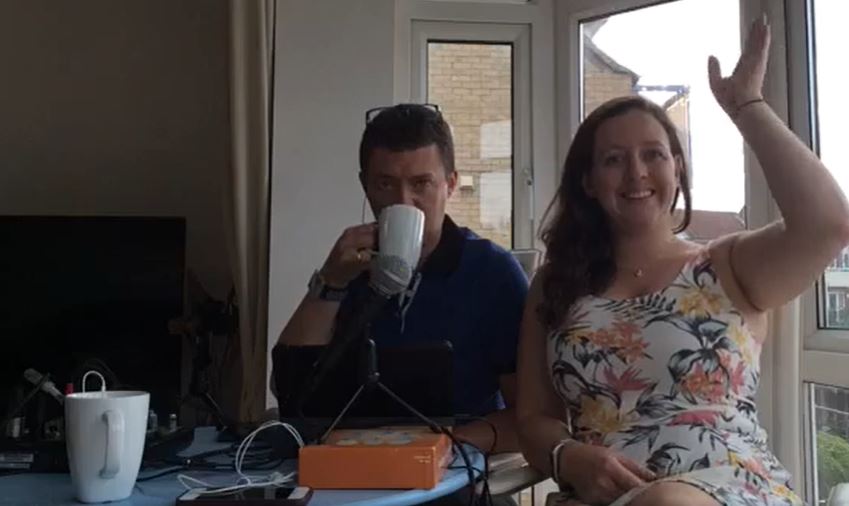 Whilst residing in the Ocean Village Marina Southampton, the Sunday Morning Breakfast Team trained new recruits in the art of tea making.

Organising birthday celebrations and a family weekend away did not stop the happy couple broadcasting from their temporary location. Armed with two microphones, a mixing desk and a tablet the team set up a make shift studio in the bay window of their mini-break apartment overlooking the marina.

Throughout the show you can hear the delight in Nicola’s voice as yet another boat skilfully glided past her floor to ceiling vista. The breakfast show sailed through the usual traffic, weather and sports news features before arriving at the birthday game. Thankfully Dan did not include his mother-in-laws actual age otherwise he could have very well have been forced to walk the plank.

It became very apparent that recalling song lyrics, even of some rather well known nursery rhymes, did not appear to be the pair’s strong suit! Borrowed from the popular podcast Sh**ged Married Annoyed, a discussion broke out which started with the question “If someone had a shot gun to your head and was going to kill you unless you could sing one song from start to finish with exactly the right lyrics, what song would you sing?”.
Attempts to sing Twinkle Twinkle Little Star and Rick Astley’s Never Gonna Give You Up then ensued.

The family gathered round to join in with the live radio show as well as taking on Nicola’s tea-girl duties.

To the gorgeous Debbie Piantino, everyone from Surrey Hills Community Radio would love to wish you a very VERY happy BIG birthday.

Listen again to the family fun